The times they are-a-changing:  revolutions in the middle-east, Britain being sold to bankers and the White Stripes, unsurprisingly, being no more. What are we to do? Yes we can protest in the streets and get beaten up by officialdom, but who’s going to rule our indie roost now, who can woo our duo dry hearts? The Kills have too close a link with the White Stripes, and haven’t been any good for years. The Ting Tings are the biggest joke since The Automatic and we no longer have Broadcast.

This is where The Lovely Eggs come in. Promoting their second album Cob Dominos (out Feb 14 on Cherryade Records) there is a definite buzz about Holly and David this year. Their limited edition single ‘Don’t Look At Me (I Don’t Like It)’ is cited by nearly every music site as a single of the year with the John Shuttleworth featuring video gaining thousands of hits. Firmly rooted in indiepop, they’re not here to tell us about taking loads of drugs in LA, because they haven’t. Rather, The Lovely Eggs chirpily celebrate the mundane and obscure, with an eye on the unseen and not taking anything for granted.

As they arrive on stage The Lexington is greeted with a giggly Lancastrian hello before the, hardly lovely, opening of ‘People Are Twats,’ a new one minute ravage against no one in particular, because as Holly told The Guild earlier, “people are twats!” The excited crowd are then barraged with the fuzzladen, debut album openers of ‘Sexual Cowboy’ and ‘I Like Birds But I Like Other Animals Too’. This isn’t just another indiepop show, tarnished with twee cakes and cassette tapes it’s a full on grunge show more akin to Shonen Knife or No Age with visceral distortion than hand claps and hair clips.

Their DIY ethos remains present in their new songs but lyrically there is an extra intricacy which sees The Lovely Eggs in retrospective mood. Where debut, If You Were Fruit, was their homage to their beloved America, then Cob Dominos brings them back home and a chance to reflect on their early experiences.  The 30 second burst of ‘I’m A Journalist’ is Holly’s tirade against spells as a hack on the local rag, and ‘Print An Imprint’ is a repetitive summary of David’s time balancing a printing job and an obsession with nightclubs.  But it’s ‘Why Don’t You Like me’ about why “girlfriend’s should always be in bands” which exorcises past troubles with boys and a route map for the creation of Holly’s old band Angelica: you can do it better yourself, especially with a cooler Sonic Youth based record collection. The new songs are delivered as if they’ve always been in the set and The Lexington loves them. 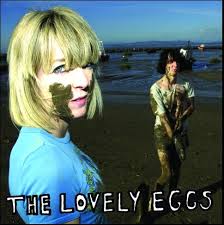 Holly’s between song banter sheds a light onto the obscurity of her mind and ability to read meaning in to the everyday. She tells about the time she had a “Posh sandwich…with olives and rocket and oil,” how when a piece of olive fell out she was inspired about the universe. She than breaks in to the ukulele accompanied ‘Oh The Stars’, clambering all over the stage and climbing up to the Lexington’s DJ booth and swinging from the decks. With the crowd’s eyes following her in awe, Holly’s trancelike as she evangelises her revelation and place in the universe.

Of course it’s ‘Don’t Look At Me (I Don’t Like It) which inspires everyone.  A game changing single for them, it’s bringing them to a wider audience. Everyone is singing along, and The Lovely Eggs seem genuinely appreciative of the anthemic status this song is achieving. Ending ‘Have You Ever Seen A Digital Accordion’ with a wall of piercing feedback, before walking off, high heels in hand,  The Lovely Eggs, live, have proven they’re more than a twee indiepop band. They are a polished, professional and imaginative surge of excitement. They can turn on the cute and quirky but aren’t afraid to tell you fuck off and smash a guitar. There isn’t time to be designing or planning a road to success as there’s too much around to distract them: lemons on streets, pigeons in nests. Tonight’s live performance is a projection of themselves, exciting, obtuse, slightly schizophrenic and a pleasure to be part of. You’d be happy to have them over for tea any day, but be warned, with “Eat Shit” written on their debut’s cover and songs called ‘People Are Twats’ and ‘Fuck It’ your mam may not approve. Not since the Moldy Peaches has there been a more exciting indiepop duo. You need The Lovely Eggs.

Muhammed Ali and All his Friends

Tagged as The Lovely Eggs

The Lovely Eggs release their new single “Don’t Look At Me (I Don’t Like it)” on 31st Jan on Cherryade Records, and you can catch a glimpse of their new video here.

The video filmed in Morcambe in their home county, Lancashire, features a guest appearance from the one and only John Shuttleworth, taking a break from his playing his organ to be the man with a sausage roll thumb.

Former Angelica singer, Holly Ross, and drummer husband David Blackwell, will be following up with a UK and European tour, including a special date at The Lexington in London, supporting The Loves at their retirement show.

Feb 6 The Railway, Southend on Sea

Feb 10 The Head of Steam, Newcastle Upon Tyne

Tagged as The Lovely Eggs