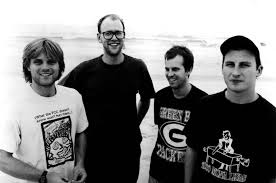 Archers of Loaf have reunited to play their first show in nearly 13 years. The US indie rock legends played an unannounced show on Jan 15th at Cats Cradle, in their home town of Chapel Hill, North Carolina.

The unannounced show supporting local band, the Love Language is their first show together since splitting in 1998 due to Drummer, Mark Price, developing an illness and calling time on the band time on the band.

There were rumours of a reunion in 2005 when Eric Bachman and Matt Gentling collaborated on Bachman’s project “Crooked Fingers”. No other dates have yet been announced although there are strong Coachella rumours.

Releasing for albums in the mid to late 90’s the alt-rock heroes reached cult status and toured with the likes of Sebadoh and Pavement, and were key players in the US indie Lo Fi scene.

Tagged as Archers Of Loaf