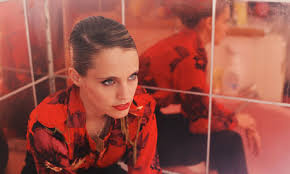 Christmas and New Year was ruined; my own personal Band Aid Single being heard for the first time. There I was with my Stilton and Gin, sitting in front of Elf, enjoying the simplest of festive pleasures, unaware of the suffering out there. Yes I know it’s Christmas, but do you Marina? Poor little Marina and her Diamonds, “Pissed off” and feeling like a failure. “For Someone who wants to be one of the best artists of her generation, I’ve done fuck all”  she whimpered to Australian radio station Undercover FM, while her US record company laughed at her and tore up her schedule in playground bully antics.  I was shocked. Who’d have thought riding the coattails of Florence’s success and emulating Bill Hicks’ “Suck satan’s cock” prophesy wouldn’t buy you friends. Maybe, it’s all “And The’s” fault. Next album, best go solo. Luckily Anna Calvi won’t fall into the same trap. She’s Anna Calvi, Not Anna and the Calvinettes or Anna and the Calvineeres or Anna and the Calvin and Hobbses or Anna Chapman and the Guilty Russian Secrets or Anna Banana and the Totally Tropical Taste Trio, But Anna Calvi. All her. Look, even the album’s called Anna Calvi.

Hustling her way into the sounds of 2011 party and writing her name in red lipstick on the forearm of every festival booking agent, she’s managed to spellbind every journalist, DJ and plugger in the room. A guaranteed slew of features, sales and gigs in quirky venues lay ahead, her sirens call magnetising editors and middle aged men across the land.  Her PR sets Anna Calvi as a goth pop songstress, laced with “classical romanticism…mysterious and decadent,” the voice of a burlesque renaissance, brooding and tantalising. Releasing Jezebel as a debut single was a stroke of genius; a dimly lit seduction in a smoke filled Chambe de Bonne. It solidifies her desired place in basement jazz joints next to Edith Piaf and she’s ready to take the smouldering cigarettes as her own.

Jezebel was a seductively confident gambit. A cover version to grab people hearts, including Nick Caves, an unforgettable honey trap which isn’t even needed on the album. Its legacy pilfers over the first two tracks of “Anna Calvi” which brazenly opens with a “Dusk to Dawn” instrumental followed by the leeching Jazz prologue of No More Words. On a record with 10 tracks the ego needed for such a slow burning introduction is dumbfounding. It’s not until track three, Desire, the vampires meander out. Stomping along like a Florence B-side, it’s a mirror image of PJ Harvey’s This is Love, almost identical in structure but lost in parody. The homage to every female artist ever continues with Suzanne and I with its Hollaback Girl rhythm under a Shirley Bassey showtune. Four tracks in and not a sense of the pay bay the hour lust of Jezebel, it certainly isn’t the Brit School formulae of Adele, Rob Ellis’ haunting production sees to that, but one feels that Anna Calvi is trying to live up to her own PR. First We Kiss is a mid set trip to the bar before they play something good, with strings lifted from an late 90s’ indie band record. Think Embrace.

Side B starts with the 5 minute- listen-to-me-sing warble of The Devil, a pleading attempt to recreate Jeff Buckley’s Lilac Wine. Then, Anna Calvi does  Patti Smith for Blackout and I’ll Be Your Man, two pleasant enough poppy songs which are about as Gothy as a Paloma Faith ballad. Mediocrity is finally given a respite for Morning Light which taunts us with a strained hurdy-gurdy and claustrophobic vocals,, and teeters at breaking point under its own minimalism. At last we feel a sense of the silk and velvet, drooping rose we expected at the start. It feels uncomfortable. Mexican Cowboys ride off into the sunset, for the album’s tremolo climax of Love Won’t be Leaving, after shooting up a toy town with blanks. It wants to be vicious at the start, with PJ Harvey whispers and pulsing mallets, but is just really a school band tuning up.

I can see what Anna Calvi is trying to do, going for the mysterious midnight cowboy niche, but the album comes across as directionless. There are so many influences and diversity between the songs that we don’t know who Anna Calvi is, maybe that’s the mystery. It’s the trying that niggles me the most, it seems too polished, too targeted, where’s the sincerity. The way Florence, Marina and KT Tunstal try to be popstars, Anna Calvi tries to be the anti-hero. For Popstars we have Lady Gaga and Britney, they do it effortlessly, for ubercool anti heroes we have Isobel Campbel, St Vincent and Cat Power. Anna Calvi belongs with enjoyable but passé novelty pop along with Paloma Faith and Janelle Monae.

“Anna Calvi” is a teenage daughter’s new best friend, the slightly older one that the middle aged dad gives a lift home after parties. Smiling in the rear view mirror and politely calling him Mister. As he opens the baby locked car door for her, he steals a glancing touch of her arm, and she blushes and looks over her shoulder. But it’s ok, she’s older, a bit alternative, and nothing like his daughter, he thinks as he twiddles his wedding ring along his finger. It’s seedy titillation for bored baby boomers, a Word reader’s wet dream, safe familiar and a bit daring, but as exciting at the other big build up of the year: VAT